If you were to ask a person what a promotional item is, chances are people will associate them with modern day giveaways, such as cups, drawstring bags, pencils with logos, etc.  However, the existence of promotional products is not as new as the idea of corporations and advertisers. In fact, they have been around for centuries. This means that there are quite a few promotional products that were either ahead of its time or an outright flop.  So, let’s talk about them. What can we learn from these old fashioned promotional items, and their advertising intent? What has changed, and what hasn’t? Let’s find out. 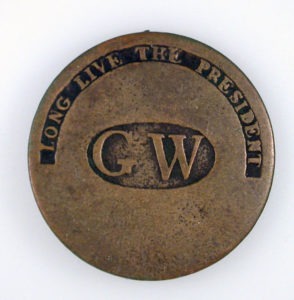 Commemorative campaign buttons are a time-honored tradition that is as American as apple pie and baseball. It is so old of a tradition that it dates back to even the beginning of the presidency of the United States of America. That’s right. Campaign buttons for George Washington existed. However, the materials and context of the promotional item were not exactly the same as we think of them today.

For starters, these buttons were given away at the first presidential inauguration in 1789. Second, plastics weren’t part of mainstream production at the time, so the button was instead a flat metal button that had a fixture in the back to put a pin in place. The American populace only had 20 years to get used to the idea of not being ruled by a king. So, they pressed the phrase “long live the president” at the top of the button. The buttons were given away as a promotional product to supporters of the new presidency.  On eBay, they are worth around $3,500 today.

Promotional Products that can Promote Animosity

Usually, when a person or a company hands away free gifts, there is a positive connotation with that gift. It is a gesture of goodwill and appreciation to both the person receiving a gift, as well as the onlookers. But what if you wanted to insult a person with your promotional product? This type of gift giving was mastered by the Kings of Siam, Burma, Laos, and Cambodia.

A white or albino elephant in the time period of the monarchies was a status of both wealth and just rule in the kingdoms. They were considered a

sacred animal that was a great honor to receive, so it was imperative in this culture that these elephants were given the best possible care.

This is an interesting take on a promotional product or gift being used to send a negative consequence to the receiver. It has left such an impact that today we use the words “white elephant” to mean a gift that means “a gift that costs too much in maintenance or has no value.”

So it would stand to reason that NASA must be making revenue on all of that merchandise, right? Wrong.

NASA doesn’t make a dime on the images whatsoever. And it all boils down to copyright law.

You see, images that are made by and for the government technically falls under free use in copyright law. Fair use, in this case, is the use of an image for: “commentary, search engines, criticism, parody, news reporting, research, and scholarship.” So, do they have the grounds to not allow people to use the image for monetary gain? Technically yes. They could still deny permissions to other companies that are willing to use that logo for monetary gain, the people at NASA decided not to.  This certainly gives their organization a good look for the public eye.

That doesn’t mean that they are not protective of their brand. There are still guidelines that are set forth by the company’s communications branch, that are laid out for people who are wanting to merchandise their logo for profit.

Their stipulations are, “Logos and other trademarks or branding of the product producer/distributors should be separate from the NASA Materials used as decoration on the product, and should be limited to use on tags, insoles of shoes, and other areas of the product where product branding typically appears.”

This is a brilliant move on their part.

They are allowing other companies to make a monetary profit off their logo. But, only if their logo is not obstructed by another company trademark. This means that the promotional product works as free advertising for NASA in exchange for free use.

As of November in 2018, brands from all over the world are making high dollar items with the NASA Logo. And there are still children who flock to space camp every year, with over 750,000 graduates since 1982.

People still make movies about the space program, talk about it, even wax nostalgia. And all of this could not have been possible. Huntsville, Alabama wouldn’t have grown if they were not generous with their image and denied the use of promotional products for profit.